To enter a sacramental universe is to know all of creation (birth, breath, death, bodies, creatures, rocks, metamorphosis, trees, decay, seasons, growth) and all of life lived in relationship (goodness, failure, struggle, loss, joy, darkness, forgiveness, ecstasy) as the Body of God.

At least that is my take on what it means to live in a sacramental universe.

One contemplative thinker puts it like this, “The world embodies the Infinite Love that is Reality giving itself away as this universe.”

As far as I can tell there are as many points of access into a sacramental universe as there are starting points in the first place. In other words, this is not about pitting one religious tradition against another. There are no “corners on the market” here. The only qualification is to wake up. 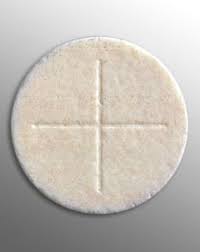 What opened the eyes of my heart was the colourless, tasteless circular wafer of the Catholic mass.

The tradition holds that the real presence of Jesus indwells this intentionally non-descript piece of bread (“which the earth has given and human hands have made”).

For me this was a first glimpse of the material world “hosting” the divine. It is the central moment toward which everything else in the Catholic faith points.

Okay, I get that it’s a  bizarre “ask” to make of the left-brain. Which is probably why the church in its wisdom left the comprehension and processing of the concept to rituals that bias the right brain.

Take the practise of Eucharistic Adoration, for example. This is when the consecrated bread is left out on the altar in a church or a side chapel and anyone is welcome to go in and sit with the mystery.  That’s all. Often you are the only one there and you just sit or kneel there in the silence.  You can stay a minute or all day if you like: This Bread is this Body, this bread is this body.

The breakthrough comes when you step outside and begin to see that the distilled moment of Presence in the bread is there in every thing and every one around you.

This you see only in fragments at first. I suspect it takes a lifetime to see it in whole. Which is the way the saints see. They are that category of people who have fully made the crossing into a sacramental universe in this lifetime. People like Mother Teresa who held the most despised and rejected of human bodies and saw only the face of God. 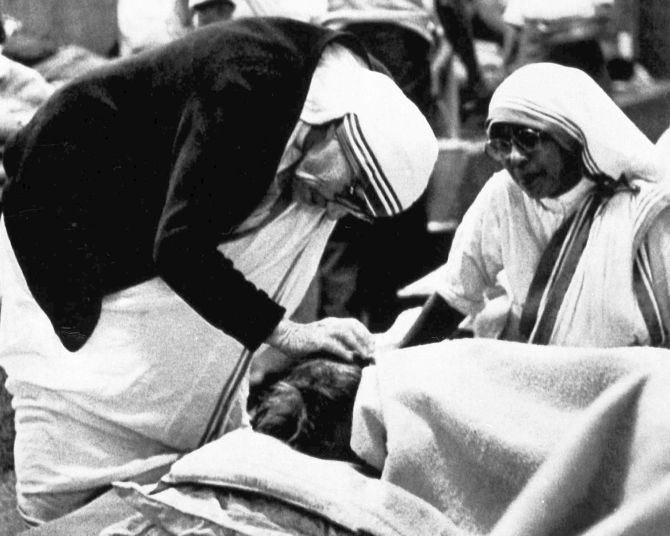 Being the blue-blood Protestant I was, when I first encountered the sacrament I was skeptical. I had been happily nurtured inside something I now think back on as a symbolic universe of meaning.

In a symbolic universe the created world is a showroom of sorts wherein created matter in all of its staggering diversity attests to the infinite dimensions of life’s spiritual realms. 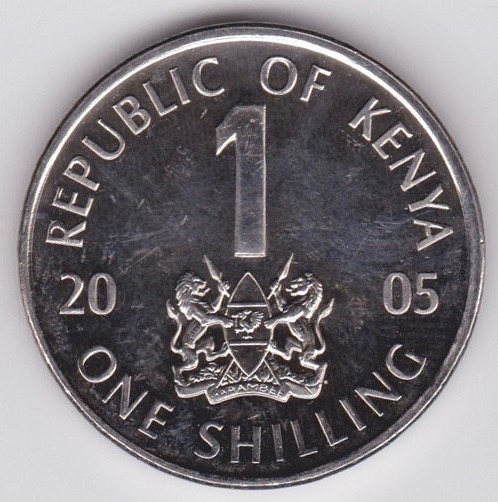 As a child I memorized Psalm 19:1 for a Bible-verse contest hosted at my missionary boarding school in Nairobi:

“The heavens declare the glory of God and the firmament proclaims God’s handiwork”.

Not only did I earn a Kenyan shilling for my recitation but from that one verse I acquired the critical insight that to see into the heavens you have to learn to see clearly what is around you here on earth.

So for those (like me!) with eyes to see (I was an eager learner and a ready people-pleaser…), the flat canopy of an acacia tree was more than simply shelter for antelope on the scorching African savannah but a type of “code” revealing otherwise unseen truths into the nature of the  sheltering presence of God.

Or a river rock, picked dripping and smooth from a turbulent stream in the Kikuyu highlands was creation’s way of attesting to the slow yet persistent work of God smoothing out the irregularities of a sinner’s rough-edged life.

In my 15-year tenure as a Baptist preacher I excelled in nurturing a rich spirituality that created these bridges of symbolic crossover from the physical to the spiritual. So adept was I at metaphorical language that I could take any object from the material realm and, drawing on its taste, smell, appearance, feel or sound, I could open up paths that brought people into proximity with the Eternal. 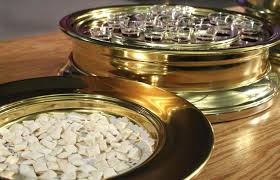 The most important of symbolic moments in the Baptist tradition is the monthly re-enactment of what my forbearers called the “Memorial of the Lord’s Supper”. The bread and “the cup” (the Baptist euphemism for wine) were symbolic placeholders for the less tangible yet more significant reality of Jesus’ outpoured blood and broken body.

However, if one thing is clear to Baptists participating in the ritual of communion it is that the bread and the drink are not literally Jesus’ body and blood. My childhood Sunday School teachers were emphatic on this point. It is what separated us from the Catholics. (The other thing being that Catholic baby girls got to have their ears pierced with gold studs as infants while we Baptists had to wait until we were sixteen – if at all. Too worldly.)

A symbolic universe is a magical place to grow up. It’s as infinite and varied as human experience and the human imagination. What’s more a symbolic universe can hold the otherwise fragmenting tendencies of life together. 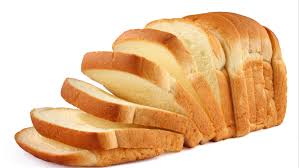 Yet, for all its beauty and undisputed value, the one thing a symbolic universe fails to do is to permanently or irreversibly alter the great rent in the cosmic fabric that separates God from creation.

For once all the metaphorical analysis has ceased, a tree is really just a tree, and a stone really just a stone. Bread and wine, however beautifully presented, are just that, bread and wine. For all the goodness and hope a symbolic universe holds out, at the end of the day, things of the earth go back to inhabiting the material realm and things of heaven retreat to their spiritual dwelling place.

That was my experience at any rate. By mid-life I had tired of metaphors. They didn’t meet that longing deep down for the created world to count for more.

The other night my 15 year-old son Oliver nagged the family to watch a nature documentary that he’d come across in the summer. This wasn’t something new. Goodness knows because of Oliver our family has watched more than our allotted quota of nature documentaries. Of course we all had more important places we needed to be and other things we needed to do but Oliver insisted. He even got his sister Abigail there. We had to watch. So we did. He gave little away except the title: Chasing Coral. I braced myself for two hours worth of scuba diving commentary amidst neon-coloured fish. 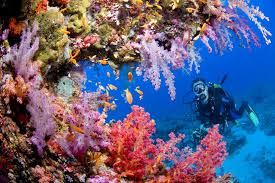 Instead what we got was an underwater glimpse into the catastrophic loss of the worlds coral reefs and the shocking displacement of the once diverse and extensive fish communities that call the corals home.  In 2016 alone, we learned,  a full one-third of the Great Barrier Reef off the north-east coast of Australia succumbed to a rise in the ocean’s temperature and is now a coral graveyard. Coral turns white when it is dying then is slowly shrouded in the burial cloak of drifting grey-green algae. 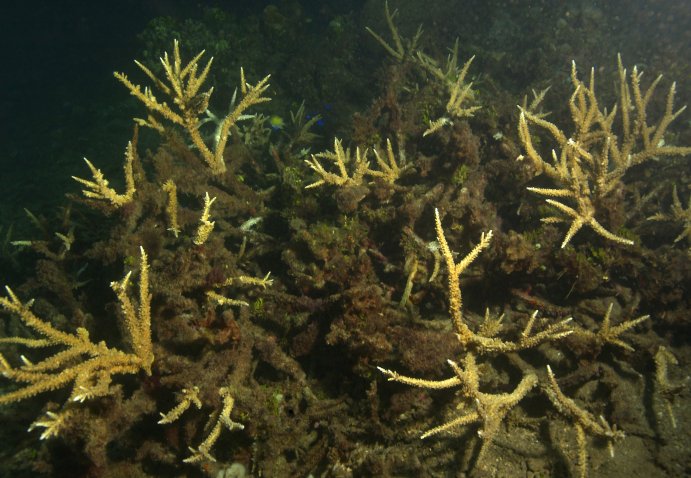 Scientists on the show wept and we, who don’t give coral reefs a second thought from one day to the next, wept along with them.

On my way home from work the next day I went into St. Mary’s and sat with the eucharist. I was sitting with the crucified Christ and I was sitting with a hidden world of dying coral and homeless fish. It was one and the same: the suffering body of God.

But here’s another thing about a sacramental universe: nothing is lost. And this is what gives me hope for my grandchildren who stand a good chance of growing up in a world without coral reefs.

In a sacramental universe everything is held somewhere in the anticipation of resurrection, everything carried forward into what Franciscan priest, Richard Rohr calls “A Very Insistent Love at the heart of all creation.” 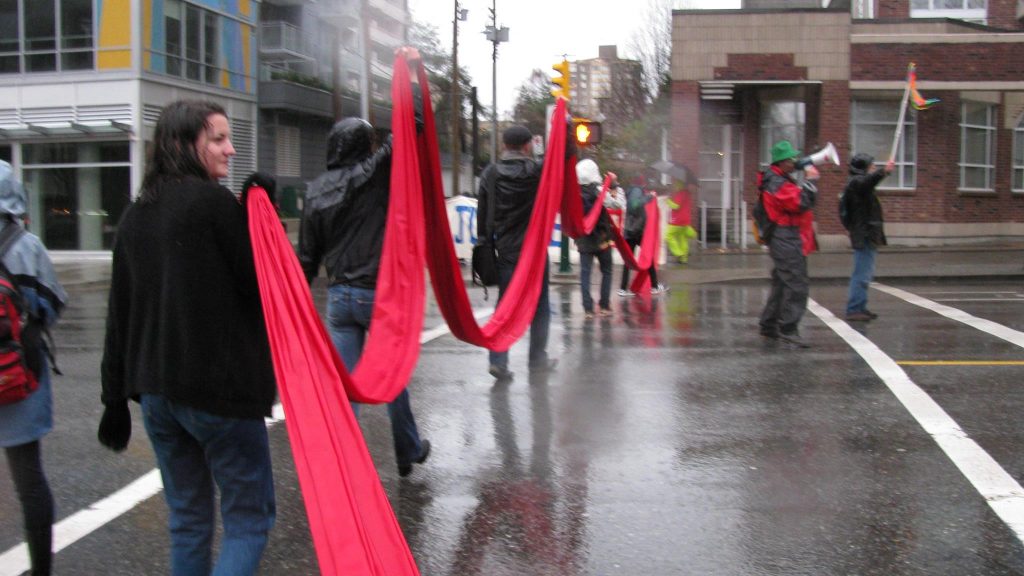 (I’m also encouraged by young people like my son Oliver who signed himself up to make a monthly donation toward a preservation organization seeking to restore lost coral beds. And by my daughter Abigail who takes to the streets in the pouring rain to protest fossil fuel expansion projects.)

The current ecological crisis in micro-environments around the globe has jarred us all awake to our common interdependency on, and love for, the earth.  There are many in our day willing to give their lives to save/serve the planet.  In so many ways it resembles our relationship to God. At one time I might have thought that was coincidental.