I found the first few weeks of the pandemic exhilarating, even while measures taken to restrict the advance of COVID19 caused so many untold suffering: overworked healthcare workers, under-slept business owners, stressed out parents of young children, bumbling politicians not sure of their next move, unemployed workers unable to pay bills, and above all those fighting for their lives in ICUs.

But it was precisely because of those high stakes that the March 11, 2020 WHO announcement was so energizing. Would this invisible, potentially lethal threat be the catalyst for the human community to completely reimagine what it means to share life together on our little blue planet swirling in space?

The narrative that formed in the earliest days of the pandemic was promising. World leaders were being called on to set aside differences and come together around the singular purpose of holding this common enemy in check. Social distancing measures were a type of sacrifice asked of all for the sake of the common good. Everyone was in this together.

Overnight a volunteer helpline sprang up on Facebook in our community-minded end of the city Anyone with a practical resulting from the upending circumstances of lockdown was welcome to post, and anyone with the wherewithal was welcome to respond. There was no bureaucracy. It was grass-roots community-building at its best. Neighbours helping neighbour (socially distanced of course!) Everyone living generously. Giving what they could.

So while Italians sang arias from balconies across empty city streets, and while dolphins swam in the Bosphorus for the first time in a century, and while memes capturing the absurdity of social distancing (eg. Jesus sitting alone at Leonardo Da Vinci’s Last Supper) circulated, I was in my element biking around my East Vancouver delivering groceries to immunocompromised neighbours and seniors under stay-at-home orders.

It’s how I met Margaret, the 89-year-old living in subsidized seniors housing a few streets over. She gave me her grocery list over the phone: “14 Hungry Man TV dinners if you wouldn’t mind, dear.”
“Fourteen?” I, who had never bought a TV dinner in my life, clarified.
“Yes, dear,” she went on in a nervous, apologetic voice, “One dinner does me for both lunch and supper, so fourteen will keep me going for two weeks.” 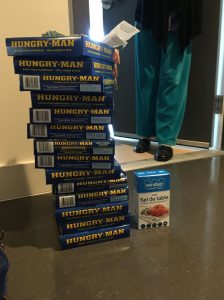 Her request came at a cost to my personal principles as regards ethical eating (over-packaged, over-priced, nutrient-deficient etc.) What was more I had to endure scowls from fellow shoppers in the frozen food section of No Frills who assumed I was one of those hoarders they’d heard about on the news, to say nothing of the challenge of bungee-cording the pile of teetering frozen dinners to the back of my bike and transporting them across the neighbourhood.

But no matter! I was part of the narrative. In on the war effort! According to my mom, my British-raised great-grandfather used to ask at the dinner table “So what have you done today for king and country?” He would have been proud.

But it wasn’t just the helpline and the grocery runs. In those first weeks of the pandemic the narrative was unfolding on cue at every turn. Community connections were everywhere. There was the pot-banging with neighbours at 7:00 to acknowledge frontline workers (some streets struck up whole bands and made an evening of it). And the waving to drivers in passing buses thanking them for their essential service, and their honking back in return. And the heavy tipping for deliveries to the front door. And the zoom calls reconnecting family who hadn’t talked in years.

The Psalmist wasn’t so far off the mark after all when describing community-living as “a fine oil dripping off the beard of Aaron”. The poet understood the dripping sensuousness that comes with human connection. It can be almost intoxicating. And that’s how it was. In the early days of the pandemic.

But it didn’t last.

Hardly a month had passed before it was rumoured that cycling groceries around the neighbourhood was putting meal-delivery businesses out of work. And the helpline was plagued with fraudulent requests preying on people’s generosity. The service was discontinued. And apparently, the banging of pots became an irritant to frontline health care workers who would rather efforts be put to keeping people off ventilators. And in time the zoom fatigued relatives drifted back to Netflix-on-demand and the stress-free zone of their couches.

Even more paralyzing, however, was how starkly the underbelly of the free market economy in a time of scarcity exposed itself. The narrative was shifting beyond repair and it seemed like our small efforts at community building could do little to stop it. We weren’t a global community united under the shared banner of a common enemy, after all. When it came to accessing PPE, ventilators, vaccines, working from home options etc. we were a world profoundly divided into the haves and the have-nots. Suddenly thanking the check-out clerk for their essential service felt more like social condescension than meaningful gratitude.

It’s been almost two years now since the heady rise and sudden fall of our attempts at community in a pandemic.

I give Margaret a call to find out how she is doing. “Fine, dear, fine”, though she hasn’t left her apartment in twenty months. We’ve promised to have her over for a proper home-cooked meal once all restrictions are lifted.

And over the course of our conversation I realize something about community building. That even in a pandemic, it is about what it’s always been about: living consistently, intentionally and relationally in the slow-lane. There are no quick fixes to overcome the distances that separate us – not a pandemic, not climate disruption, not even aliens invading from another planet. The work of community will always be about the long haul, staying with the little things, like going through the front door and greeting my ornery next-door neighbour rather than slipping in through the back gate and avoiding contact, or running the left-over cake from supper up the street to the new Muslim family from Afghanistan. And the bigger things like confronting the shadow side of capitalism by putting my privilege to work for long-term systemic change like changing where I bank, or lobbying politicians on behalf of refugee rights, or risking arrest for sustainable energy.

If my great-grandfather were to adapt his question to a post-pandemic world he might well ask. “So what have you done today to make the global village a kinder place?
And I’d probably respond that I haven’t done everything, but neither have I done nothing. I’m guessing he would approve.