The pre-dawn text lights up our shoebox of a bedroom. I roll off the side of the bed so as not to wake my husband, grab my work clothes from a hook on the back of the door and get dressed in the living room to the light of the Christmas tree.

Thankfully science is on side. The genetic engineering seems to be working. Almost all live births now are girls. If it’s a boy we’ll send notice and the buyers will come to take him away.

My face looks back at me out the living room window, superimposed over the lights of Vancouver’s distant downtown. I use the reflection to pin back my bangs and notice my car at street level below entombed in a layer of ice.

The universe maintains its indifference and I begin rummaging around the living room for a makeshift ice scraper.

People often ask how we can be so cruel as to send the boys away. I explain that Hammingview is a females-only world. “Theoretically we could sustain ourselves for a hundred years without a male in sight.” The next line of scrutiny is predictable and I try not to sound callous. “Sperm is stored in the deep freeze. It has no expiry date.”

So if Pif’s firstborn is a male I’ll do what I do every time a boy is born at Hammingview- I’ll rub my thumb over his cheek while he chugs down a bottle of colostrum, his eyes rolling to the back of his head with pleasure. Then I’ll step to the side when they come for him and remain willfully ignorant of how he meets his end.

People persist. They want to know if the mothers object when their newborns are taken. “Some do”.  We endure them crying out as we work. But most are conditioned to look the other way, their eyes large and silent, revealing nothing.

I circumvent further interrogation by redirecting focus to the Hammingview nursery. “A room chock-a-block full of baby girl cuteness,” I gush. “It’s hard to keep track of whose daughter is whose.”

The first time I walked through the nursery my eyes smarted. Yvonne was touched by my entry-level sentimentality. Hammingview 101. Then she hastened to warn me not to get over-attached. “They don’t all make it,” she said with feigned objectivity.

Within 24 hours I was over-attached.  It’s a mandatory pitfall for novices at Hammingview. A rite-of-passage for the uninitiated, if you will.

The newborn responsible for breaching the low-lying defences of my heart arrived into this world before the sun was up on January 6. I named her for the day on the Christian calendar when the three kings were said to have visited the Christ Child: Epiphany.

The bond between Pif and me developed on the side like a secret between friends. She’d await my arrival each day and when Yvonne wasn’t looking I’d spoil her with cuddles, warmed-up milk, and extra rations of cereal. But most of all Epiphany loved it when I sang her dredged up and half-remembered folksongs from my childhood though I’d be careful to stop short of the end verses when things take a turn for the worst. Like when my darling Clementine drowns in a vat of brine down in verse six:

Ruby lips above the water, blowing bubbles soft and fine.

But alas, I was no swimmer, so I lost my Clementine.

While my attachment to Pif deepened so did a growing unease that I was setting her above the rule of law at Hammingview. “She’s got attitude alright,” a colleague offered when I asked. At Hammingview “attitude” is code for trouble. So as Pif and her cohort turned the corner on adolescence and prepared to move in with the other Hammingview teenagers I decided to make the break. There was no final good-bye. I simply didn’t show up for work the day of the move. Epiphany had come of age. This would be a new chapter in her life.

I start. It’s Oliver standing in the hallway, his pyjama bottoms hanging off his lanky 16-year-old waist.

When I tell him about the text his eyebrows lift. He knows what Pif means to me.

Oliver was alarmed when he first heard that I had a job at Hammingview. Hires from the outside are rare for the industry. I had always worked in the non-profit sector with organizations designed to set society’s hard-done-by back on their feet. When burnout set in I craved manual labour that paid by the hour, gave me back my weekends, and asked little of my heart.

Which is how I mustered the courage to walk up the drive of Hammingview Farms unannounced and inquire about employment. Standing against a bleak November sky Yvonne looked at me suspiciously. “You aren’t one of those activists with a camera hidden inside your coat, are you?” The question confused me.  I thought I was applying to work in the most benevolent industry known to humankind.

My naivety served me well. Yvonne offered me a job on the spot and in keeping with expectations my first few days at Hammingview were exhilarating. The primal connection with this improbable community of lactating mothers was immediate and all in the context of the rhythmic pulsing of the pumps and the steaming-warm sloshing of life’s most sustaining miracle: milk. It had been years since I had weaned Oliver yet the travail of breastfeeding came back to me as though it were yesterday: the involuntary let-down, the frustrations with latching, the cracked and bleeding nipples that never get a break, the ever-lurking risk of mastitis, the engorged mammary glands when milking is delayed, hard as rocks and painful as hell.

“That industrial grade spatula might work,” Oliver proposes as a solution to my ice-removal conundrum before disappearing into the bathroom.

When he was four a Mexican playmate convinced him to set a basin of water and a shoe outside the back door on the eve of Epiphany. “While you are sleeping the Three Kings will stop by your house to give their camels a drink,” insisted his young friend. The next morning Oliver awoke to a tipped and emptied water basin and a shoe spilling with candy. He stood silent for a long time looking out through the slats on our back porch pondering all that had transpired in the darkness on our soggy, East Van lawn.

When he emerges from the bathroom he offers to scrape the car off for me.

For months my decision to cut ties with Epiphany seemed sound. I stuck to the discipline of it, attending to the flow of new arrivals into the nursery as a way of filling the space made empty by Pif’s departure.

Then mid-morning on no-day-in-particular my resolve came up short. This was all the excuse I needed to abandon whatever it was I was doing in the nursery and go in search of her.  She wasn’t difficult to find, lying on the grass with a few friends, her black and white coat glinting in the early summer sun. It occurred to me then how clueless she was about what lay ahead and how these would be the most carefree days of her life at Hammingview. It didn’t seem right to interfere. I turned my back and walked away, glancing over my shoulder for one final look, and there she was!  Standing apart from the others, looking at me.

My half-whisper anticipated a well-deserved snub.

Instead Epiphany tossed her head and ran at me with such force I had no time to brace myself for the 700-lb display of adolescent affection. I was knocked to the ground on contact. Laughing I got to my knees and, just like in the movies, threw my arms around her neck promising never to abandon her again.

I wasn’t present when she was inseminated and only learned of her pregnancy when I saw her name on the board. It was in a list with others under the word “confirmed”. While this news meant that her unstructured days of running in a pack and watching the fields turn colour were at an end it also, and more importantly, meant she’d be allowed to stay on at Hammingview. At least for now. Some of the girls “don’t take”. Their names appear on the board under the word “open”. If too many open months pass their names are erased and that’s the last we see of them.

Oliver watches me pull on my boots.

Hammingview stories are dinner fare at our house. He’s well acquainted with the shortlist of potential outcomes, each with its own variation on misfortune.

There’s Tilly whose daughter was stillborn and Jewel whose wasn’t. Yet where Tilly let milk flow like a tributary of the Fraser River in spring, Jewel wouldn’t relinquish an ounce. No amount of pleading could switch on the oxytocin release mechanism in her brain. A week later the count was out and I knew Jewel had been taken.

Agnes stories are a favourite. I refer to her fondly as the Mother Superior for having given a lifetime of service. Her badge of honour is a limp. It won’t be long before the truck comes for Agnes.

Then there is Dori. Oliver knows it would please me if Pif had even an ounce of Dori’s spunk. She is legend at Hammingview for staging a revolt. It seems she had no intention of being impregnated a second time. Alerted by the syringe and latex gloves neatly laid out on the dispensary table she made a spontaneous break for freedom that left an air gate dangling by a hinge. We found her later that morning at the neighbours’ and had her home by lunch. The next day Dori was “done” and now her belly, like a ripening sadness, grows fuller and heavier by the day.

On my way to the door I stop on impulse at the alcove where our nativity scene is displayed through the Christmas season. The god-baby looks placidly out at the world from his fabled bed of straw.

“You shouldn’t have come,“ I say sullenly. “This world doesn’t do well with ambiguity.”

Oliver heeds my dip into despair before stepping over by my side. Then, with the deliberation of a chess master, he picks up the lone cow resting outside of the stable behind two sheep, removes the three kings from their place at the centre of the action, and sets the broad-faced matron-of-milking-mothers down in the coveted spot beside the manger within reach of the infant’s outstretched hand.

He holds the cow’s back for a moment as though to check for unforeseen danger. Then, releasing his fingers from the game board, he looks me in the eyes and punctuates the move with a grin.

It’s not the response of my heart but when he gives the spatula the high five I’m looking for I know it’s response enough. I open the door and head outside into the frosty darkness. 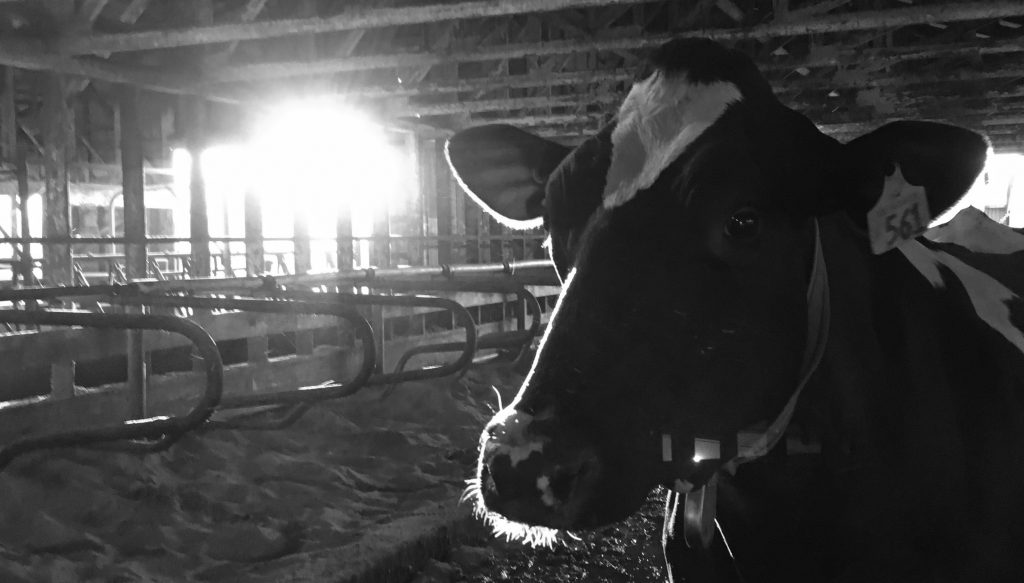